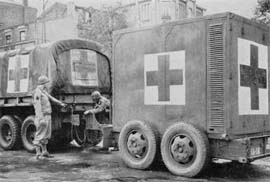 One development was the creation of Penicillin.  It was created pre-war but was not used in large quantities till World War Two.  The first batches in 1939 were weak, but through determination a new version, 20 times more strong, came out in 1945 ().  On D-Day penicillin was used en masse, saving thousands of lives and strengthening America's cause.  It saved many lives, but still left many to die because the time lapse between injury and treatment still remained very broad.  However, the number of people being infected was vastly decreased and survival chances were greatly increased.

A doctor spoke of penicillin saying “an army is a vast medical laboratory when disease and injuries are seen on a far larger scale than in peacetime. Many improvements in the treatment of infections have come from experiences on battlefield (The Big Bang Story)."  The first world war presented a perfect opportunity for medical research and medical discovery.  War may seem like a horrid and bloody time, but it can lead to technical innovations that would never have been invented without it.

Penicillin also brought new hope to the soldiers and to the home front.  Propaganda such as "thanks to penicillin he will come home" gave soldiers confidence that they would not die of infection (The Big Bang Story).  This also motivated civilians to join the war effort.

Another improvement was the development of a new system of treatment.   During World War One many soldiers were left to die if there injuries were too severe.  This did nothing to boost soldier moral.  Soldiers went into battle knowing that it was life or death, a severe injury and even minor wounds could kill them because treatment was not available to help.  In World War Two this system changed, those with severe injuries were often treated.  This was a much better system because more people survived and more people were given the chance to survive.

The mediocre blood transfusion process was also greatly improved upon in World War Two.  Primitive techniques became more advanced, and the system of storing and distributing blood became more efficient.  With a better system of storing blood, blood was usually available when a soldier needed it.  The blood was also most likely fresher and less contaminated since the containers were better constructed.  However, blood was often in short supply.

The downfalls of battlefield medicine in World War One were met and solved.  Brilliant minds worked together to develop new methods of completing simple acts.  These small changes saved thousands of lives.  Soldiers had the confidence that if they were injured in battle, someone would be there to help.  New advancements allowed that to become reality, soldiers could be saved more often.  However, even though many of the technological issues were solved efficiency still remained a major issue.